The Route 51 flag lands in Frankfurt Germany. Route 51 branched on to the Autobahn last week as the Club ’51 flag flew proudly outside the European Central Bank. Niall Merriman from Charlestown brought the umbrella his mother Carmel made for him before the ’89 final. The Brett family, Paul , Lisa and Dylan from Castlebar are also based in Frankfurt as is Robert Bashford from Bangor. The flag will now make its way to the next destination. Keep checking in on www.mayoclub51/route-51 to see where the flag arrives to next. To date the Mayo Club 51 flag has travelled 12954.28 KM!

Niall Merriman from Charlestown, The Brett family, Paul, Lisa and Dylan from Castlebar and Robert Bashford from Bangor outside the European Central Bank in Frankfurt.

With the Championship back in action and Game 2 just around the corner, we’ve decided to run a competition for our younger ’51ers. One of our main aims is bring as much colour as we can to matchday. Our collection of flags is constantly growing and we’re always on the look out for new ideas! This is where we need your help! With the help of our new friends at the Castlebar Cycle Store and our old friends at T-Rex Clothing, we’re launching a flag design competition for national school kids around the county. We’ve already got the ball rolling around Castlebar and surrounding areas, but we’d like to spread it further around the county.

The rules are fairly straight forward: design us a Mayo flag!

Our winner will receive the terrific first prize of a BMX Bike, kindly sponsored by Castlebar Cycle Store (it’s even green and red!!) and we will also be printing the winning design, exactly as we receive it, onto our next new flag. So you’re design could be proudly flying in Croker this summer! We will also be giving away our limited edition t-shirt to 10 winners in our raffle, sponsored by T-Rex clothing. A huge thanks from Club ’51 to both our sponsors!

If there are any teachers or principals out there, get in touch with us ASAP and we will forward on the details and application forms. Please note that this competition will be run through Primary Schools only.

It’s starting to feel like the summer is truly upon us, what with all these trips to Croke Park so early in the year. The weekend is just around the corner too and with it comes the anticipation of another cracking day of football in the capital as Mayo take on Derry in the first of the Allianz National Football League semi-finals.

Mayo v Derry throws in at 2pm and it’s set to be a very different game from the lacklustre occasion we witnessed in MacHale Park last Sunday, given that Derry will most likely bring their first team this time. For those of you who are truly insatiable, Dublin take on Cork in the second semi which throws in at 4pm – a fixture that will hold all the more interest for us should the first game go our way.

In what is fast becoming a familiar pre-match tradition, Club ’51 will be convening across the road in the Jury’s Croke Park Hotel from 12pm. Come join us, say hello and have a cupán tae or a pint before the game. If the day is fine, look for us out the back where you’ll see the flags!

This is the first knockout game of the year, so we’re expecting a high turnout and a good atmosphere, and Club ’51 will be continuing our quest to turn Croke Park into a Sea of Green and Red – but we need your help! If you’re making the trip, be sure and bring a flag and let’s get some colour into those stands.

And most important of all, let’s stand tall and get behind our team on Sunday. It’s up to us, in the crowd to create the atmosphere, so let’s play our part and make ourselves heard – especially if things aren’t going our way. So stock up on the honey and lemon, raise your voices and let’s bring back the Mayo Roar.

See you all on Sunday -Maigh Eo Abú!

So it’s back to Croker again for us and the planning is well underway. “To stay the night or do a day trip?” – that is the question.

It follows what has been a fairly good league campaign, it has to be said. A shaky enough start with some very good individual displays and of course, we all met some new and friendly faces. Yesterday was a hectic one as we broke out our new flags for the first time. A few of you were asking us where they came from – www.flagmanireland.ie has been our supplier thus far and, in fairness, he has produced some quality gear in some very tight time frames!

And also, Michael Lyster and Eamonn O’Hara were fortunate enough to get their photos taken with some of Club ’51. We were in a rush, but being the good people that we are, we decided it wouldn’t be fair to say no after they asked.  You’re welcome lads!

And then some of the players wanted in.

And we also presented our brand new and exclusive Club ’51 t-shirt to our first ever competition winner, Lorraine Kelly! She got this for designing a banner that we hope to get made up soon, which can be seen here. Well done Lorraine!

Anne Marie Flynn is pictured above trying to take the shirt off Lorraine. While we agree it’s a very nice shirt, we don’t condone such behaviour.

So it’s onto Croker again for the green and red. A big thanks to everyone who helped hang flags, fly flags, bake cupcakes, take pictures and simply contribute to the good feeling yesterday, and also to the players who were great sports. Here’s hoping we’ll be planning again this time next week.

Courtesy of AnnMarie Kenny. And they were class! 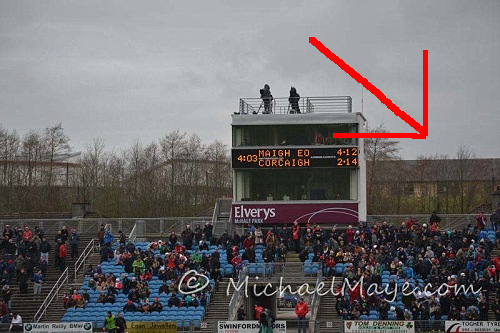 Another beautiful day, another milestone for Club ’51. First, we unveiled our giant flag, then we made our first appearance in national media. Then, just yesterday, our Facebook page reached the 500 mark!

But that’s in the past, and we like to live in the now (Disregard the name of our club, just briefly). Today, we were featured on local radio’s hottest slot – the 10:30am on the Tommy Marren Show! A big well done to our own Anne Marie Flynn for her performance this morning. But that’s not all! Almost simultaneously, our website saw it’s 15,000th hit! Quite a way to go to reach our good colleagues over at the MayoGAABlog, who reached a staggering 1,000,000 hits last year, but it’s a hell of a start!

We have plenty in the pipeline between now and June, but first thing’s first: Derry on Sunday. I’d like to echo the post from earlier in the week about our relocation to the MacHale Road sideline. Lets make the last home league game of the year (and potentially our last home game in 2014 full stop, depending on how results go elsewhere in Connacht) one to remember. We’ll be unveiling our new flags, too, so make sure you join us! Remember, everyone is welcome, all of the time.

After the shameless theft of the famous “Black Rectangle”, you can now locate us by following the floating, crudely drawn red arrow in MacHale Park.

We’ll also be announcing the winner of our Super Duper Flag Design Competition tomorrow and presenting the lucky winner with their very own Club ’51 t-shirt! We have been swamped with entries, so we will be working late into the night, again, tonight to pick our winner!

See you all Sunday, lets hope the sun keeps shining and we find ourselves planning for Croker Sunday evening!

In the aftermath of a rollercoaster of a game last night against Dublin that will no doubt have us all talking for some time to come, here’s a feature on Club ’51 from yesterday’s Irish Examiner written by Ballina’s own Terry Reilly, after a chat with Anne-Marie during the week. Hopefully for those of you who’ve just recently signed up, it’ll give you some more background on what we’re about and what we want to achieve.

It’s not easy to keep the heads up when things aren’t going well, and as supporters, we are fairly put through the wringer,  but the Mayo support in Croke Park last night was fantastic and we want to keep that momentum going.

We’re cooking up a plan of action for what will now be a crucial game vs. Derry next week and will be in touch during the week with an update.

Have a good week folks and keep the faith – Maigh Eo abú!